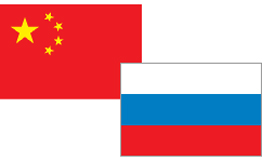 The SINO-RUSSIA PPH program will start from this 1st July, this program is similar to those of SINO-USA and SINO-JAPAN. And the following is our past essay on the PPH program between China and other countries.

The Patent Prosecution Highway is Piloting in China

—introduction on PPH programs between China and USA, Japan

Recently, China government has speeded up the process of international patent cooperation. Currently, the Patent Prosecution Highway (PPH) Program between China and several other countries has started or prepared to start. Among the cooperations, the Sino-Japan PPH is piloting from 1st November, 2011, the Sino-America PPH will be carried out on 1st December, 2011, and Sino-Korea program will start from March, 2012.

PPH allows applicants to obtain corresponding patents faster and more efficiently, avoids unnecessary repeated works of the OSF, simplifies the prosecution procedure and benefits the applicant as well as the industry. PPH was first tried out by and between U.S.A and Japan in 2006, and officially operated from 2008. So far, South Korea and some European countries have participated in the program.

For the first two signed PPH programs, Bridge IP Law Commentary will introduce you the conditions and procedure of American and Japanese patentee’s application in China for your reference, and we also believe the cooperation between China and other countries shall also follow the such regulations.

Under the program, American and Japanese applicant could request accelerated examination basing on the application in the patent office of its own country to SIPO once it could meet the legal conditions and relevant documents are submitted. And the work product includes the general work product and the patent cooperation treaty (PCT) national phase application.

Second, there’re also regulations on the work product of the applicant’s own country’s patent office

First, the work product shall be patentable and allowable, namely part or all the right claims could be patented, such as the patentability and allowablity is pointed out in the Decision to Grant a Patent, Decision of Refusal, Refusal Notice, though the patent application is not necessarily approved hereby.

For this, the PPH agreement between China and America has made detailed regulations on the patent approval process in U.S.A, which says that any right claim in the column of “Claim(s)         is/are allowed” in the Notice of Allowability and Fees Due, Non-Final Rejection or Final Rejection could all be deemed as the patentability. Furthermore, as to the right claim in the column of Claim(s)_____is/are objected to in the Non-Final Rejection or Final Rejection, as pointed by United States Patent and Trademark Office (USPTO) officials, it could also be the allowable once it could be altered to the independent right claims. However, when a claim is rejected and the USPTO examiner indicates in the Office action that certain features of the allowable/patentable invention have not been claimed and if properly claimed such claim may be given favorable consideration, the suggested and hypothetical claims are not regarded as allowable/patentable in this program.

In addition to that, the exception conditions are also be agreed in the Agreement. The applicant is permitted to alter the documents including the right claim on the request of substantial examination or within 3 months after the receipt of the substantive examination notice issued by SIPO. That gives the applicant a chance for making up, and it also shows the fast and efficiency of the program.

As to the document necessary for the PPH program, it shall include the Request for Participation in the Patent Prosecution Highway Program and the copy and translation of the office action attached (on the substantive examination on the patentability of USPTO and JPO) , the copy and translation of all the right claims determined to be allowable and patentable by USPTO and JPO, the copies of references and claim correspondence table cited by the USPTO and JPO examiner.

By comparing the two PPH agreements, it could be concluded that the program demands, procedure and documents presentable in China’s PPH cooperation with other countries are roughly defined. However, for the different examination ways among the countries, the applicant shall still pay attentions to many aspects in application and examination reasons. Besides, the PPH programs discussed today are all in pilot for one year, and Bridge IP Law Commentary believes the more detailed and efficient regulations on the program will be promulgated after practices for the formal program.

For further information, please contact the lawyer as listed above or through the methods in our CONTACTS.

Bridge IP Law Commentary’s posts, including the comments and opinions contained herein, shall not be construed as the legal advice on any issues related. The contents are for general information purposes only. Anyone willing to quote or refer the posts to any other publications or for any other purposes, no matter there’s benefits gained or not, shall first get the written consent from Bridge IP Law Commentary and used under the discretion of us. As to the application of the reprint permission for any of our posts, please email us to the above addresses. The publication of this post or transmission of it through mail, internet or other methods does not constitute an attorney-client relationship. The views set forth here are of due diligence, neutrality and impartiality, representing our own opinions only and are our original works.